A downloadable game for Windows, macOS, and Linux

This Is Not A Happy Story (Demo)

This Is Not A Happy Story is a sci-fi visual novel, with interactive puzzle and horror elements allowing players to fully immerse themselves in the universe. After a nuclear world war leaves Earth dying, humanity forms the NIHRE, an organization dedicated to identifying, studying, and eventually colonizing new planets in hopes of preventing the extinction of the human race. TINAHS follows the second crew employed by the NIHRE, over three-hundred days into their mission studying the planet Aspera. But when an unpredictable tragedy interrupts their lives, the crew will soon find out that they're not alone...

With 6 unique endings & VERY meaningful choices, will you be able to get everyone home alive?

(Demo spans from the prolog to the end of chapter one, out of five chapters.)

FEATURES:
Weighted User Choices
You ever play a game and feel like your choices mean nothing? TINAHS follows a tree-roots path, meaning every time a plot-relevant choice is made, the path splits completely. There is expected to be at least 7 endings, though more may be added during development!

Character relationships
Player choices affect character dynamics, affecting whether they're willing to help each other throughout the story, what dialog options are available, and how the characters feel about one another.

Diverse cast
The crew includes bi, gay, trans, neuroatypical, and religiously diverse characters, with organic personalities that don't rely solely on those labels. Player point of view switches between characters throughout the story, allowing you to get to know the depth of each character.

Accessibility
Extensive options include color blind mode, Dyslexic-friendly fonts, disabling most animations, and captions for sound effects. A separate build is available for visually impaired users, specifically designed to work hand in hand with Ren'py's built in self-voicing mode. To activate, press V on your keyboard, and use the arrow keys and enter key to navigate.

Gameplay
Gameplay includes, besides the usual VN dialog, interactive mini-games and events which allow the player to participate when their character must complete a task, utilizing puzzle and tension aspects without relying on QTEs. Players can also use a free-time travel system, meaning any time the character controlled has free-time, players can explore the ship, and talk to other crew members or uncover hidden secrets.

See the patreon for more detailed information about the game's expected development, and subscribe to support the game's growth! Or, if subscriptions aren't your thing, feel free to buy the album of music used in the demo on bandcamp, or leave a donation when you download the demo! 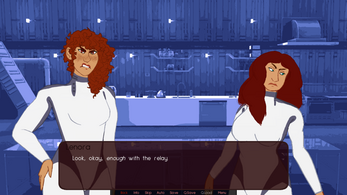 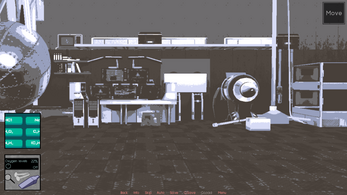 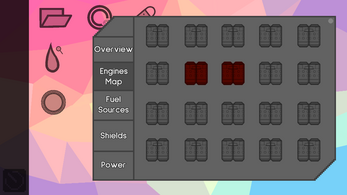